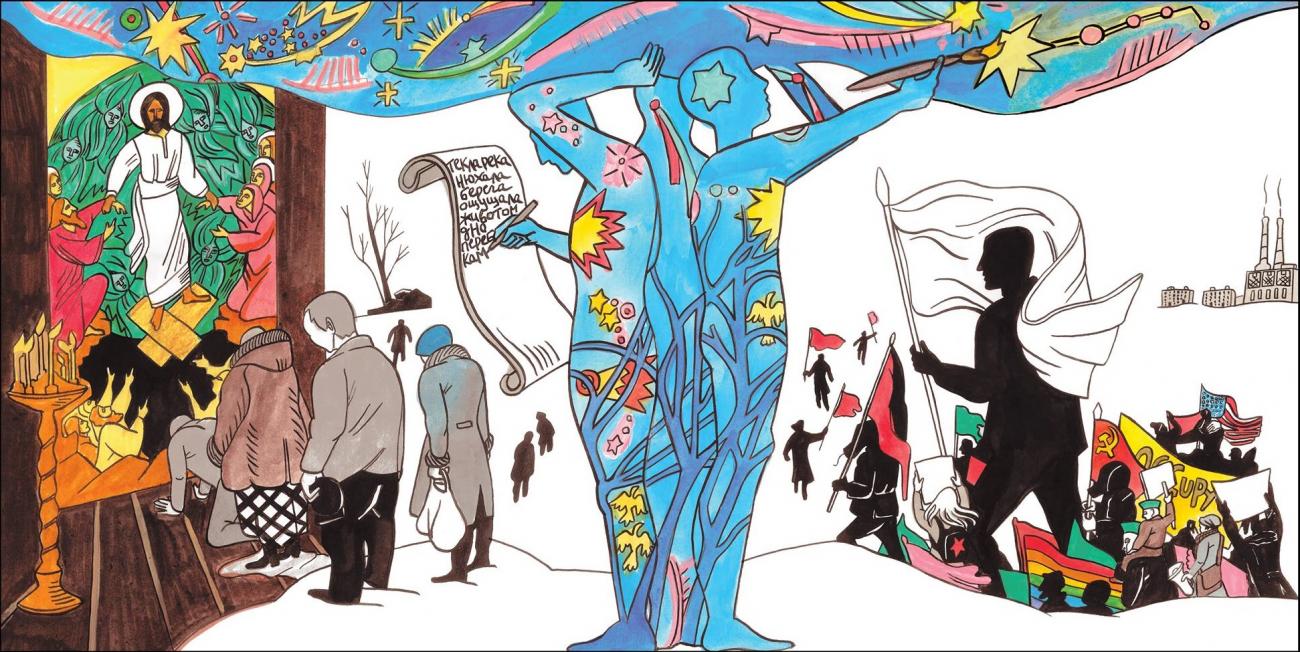 In Spring 2020, the Covid-19 pandemic forced universities and colleges to cancel public programming or to hold virtual events. It also gave fresh impetus to ongoing discussions at the Melikian Center, on how to better inform the US public about culture, identity, and politics in Russia, Eurasia, and East Europe. As was the case in the various citizen-diplomacy initiatives of the late 1980s, including the “space bridges”, constraints on physical travel can open new pathways of meaningful interaction and learning across borders.

Creative Horizons is a collaboration between ASU’s Melikian Center, the Havighurst Center at Miami University, Ohio, and the Institute on Russia at the University of South Florida. Alongside support for faculty and students at their respective universities, all three units share a commitment to promoting a greater understanding of Russia and the surrounding region. Building on separate experiments in virtual programming since Spring 2020, this joint venture will give audiences in Arizona, Florida, Ohio and beyond the opportunity to hear from working artists in the region as they discuss their methods, perspectives and aspirations.

The series features videos produced in collaboration by the featured artists and videographer Ari Gajraj, followed by online discussions featuring the artist and moderated by regional specialists from ASU, USF or Miami University.

The first featured artist is muralist and graphic reporter Victoria Lomasko, whose 2017 book Other Russias attracted widespread reviews and attention, including coverage in the New Yorker, the LA Review of Books, and The Calvert Journal. Other Russias also won the 2018 Pushkin House Prize for the best book in translation. In 2019, Vika visited the Melikian Center and the Havighurst Center, where she created the mural Atlases for the King library. In September 2020, Victoria Lomasko spent time in Minsk, Belarus, covering the extended civic activism protesting the rigged August election results.

Vladimir Tsesler is the second artist featured in the Creative Horizons series. One of the most famous Belarusian artists, Vladimir is a designer and creator of art objects with about 40 international awards in the field of poster, book and advertising. His works have gained worldwide fame and are stored in the collections of many museums including The Musée de la Publicité, a museum of advertising history located in the Louvre's Rohan and Marsan wings. Tsesler uses ridicule, humor and even sarcasm in his art work. He has nearly 37,000 followers who keep track of him on Instagram.

The third featured artist is Szabolcs KissPál, who has created multimedia docufiction to counter nationalism's fantasies. He is a Hungarian artist based in Budapest whose work engages with the social and political circumstances in which he lives and the role of the artist in society, particularly in the post-communist world. Like many artists in former eastern Europe his work displays some ambivalence about the current situation as well as hope for a more structured and controlled continuing emancipation. KissPál works with photography, moving image and sculpture.

Ermina Takenova, the fourth artist of the series, is an animator, director, and illustrator who is exploring her cultural heritage through her art and is learning to understand it better. Takenova’s short film “Mankurt” is based on a Turkic legend adapted by Kyrgyz writer Chingiz Aitmatov in his novel The Day Lasts More Than a Hundred Years. She describes her short film and other works in more detail on her Royal College of Art MA program page.

The fifth artist to be featured in the series is Kateryna Babkina from Ukraine, who is a writer of short stories, poetry, novels, plays, and screenplays, Kateryna's Sonia was shortlisted for the 2013 BBC Book of the Year, and her children's stories are very popular throughout her native Ukraine. Most recently, she won the 2021 Angelus Central European Literature Award, as well as the Natalia Gorbaniewska Readers' Choice Award, for her book, My Grandfather Danced The Best. Kateryna is also active on instagram.

Ilya Kaminsky, poet, was the sixth artist of the series in an reading and Q&A with Katie Farris. Born in Ukraine, Ilya Kaminsky was granted political asylum by the United States in 1993. He has published a number of critically acclaimed books that imaginatively weave together the personal and the political. His most recent collection, "Deaf Republic" (2019), was a National Book Award finalist. He has won the Whiting Writer’s Award, the American Academy of Arts and Letters’ Metcalf Award, the Dorset Prize, a Ruth Lilly Fellowship and the Foreword Magazine’s Best Poetry Book of the Year award. Recently, he was on the shortlist for the Neusdadt International Literature Prize. Katie Farris is an accomplished poet and translator. Farris and Kaminsky worked with fellow poet, Valzhyna Mort, to edit "Gossip and Metaphysics: Russian Modernist Poems and Prose" (2014). Her most recent book is "A Net to Catch My Body in its Weaving" (2021) which won the Chad Walsh Chapbook Series from Beloit Poetry Journal. She is also the author of the hybrid-form text "boysgirls" (2019).

Kateryna Babkina returned as the seventh artist to share her story of fleeing Ukraine for Poland.

Alisa Lozhkina moderates the Q&A featuring Ukrainian artists Kinder Album, Igor Gusev, and Catherina Lisovenko. A video introducing these artists, and others, can be viewed here. These Ukrainian artists are practicing their craft under the very dangerous condition's of Russia's war on Ukraine. Hear from them about their art and what makes them continue their creative pursuits even when their lives are at risk.